Every morning, approximately at 9AM, old chinese man enters the living room, turns on the green lantern on a massive desk and then slowly walks to the kitchen. Boils water in a kettle, makes a cup of tea and then slowly walks back through the living room. Every move is so synchronised, so we, as we see this ritual every morning from our office, can start syncing our watches. 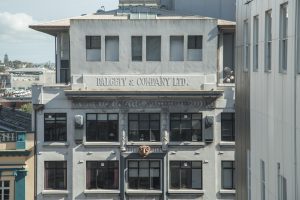 Do you know what I want to tell? Every time when I look at this old building, which has somehow survived in a battle with big city for a precious square meters, I understand.. The epoсh has gone.. One, may be two more years and who knows, maybe most of old buildings will be demolished and replaced by skyscrapers made of steel and concrete. In the best case scenario, they may keep the facade, in the worst..

The post is all about one day, when I brought my camera to the office, opened the window and made a few pictures from the roof level, which I decided to share with you. By the way, Dalgety & Company Limited – was the biggest Australian – NewZealand wool company, founded in 1846 in Melbourne and managed from London. So, the merinos head on the facade is not just for nothing. 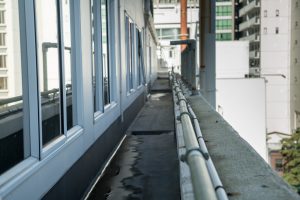 The shared space we were occupying some time ago, was based in the old building one of the biggest New Zealand newspaper publishers, New Zealand Herald. As far as I know, the building was empty for at least two years, until we had entered it for a time frame of two, may be five years. No one was sure exactly. By that time, the owners had not decided yet when they are going to start demolition and when they want to proceed with building something new.

After four months staying at our new place, we were visited again and were told it was time to leave, since they finally decided to replace the old building with a brand new business center with apartments. Robett was doing his best to find a new place for all the colabs, however, nothing did work and as result, all the folks drifted apart. I have to say rent in Colab was very cheap, thanks to no fees and extra payments on top of our monthly bill. As far as I know, all the rent, power and water bills were simply splitted between each of us. 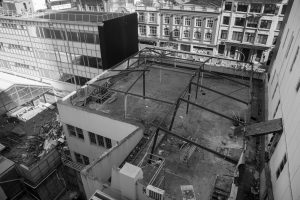 Anyway, it’s already in the past, so let’s talk about something positive. For example, let’s talk about Auckland architecture. Hmm.. Doesn’t sound like a good example to start? ) As you can see, Auckland lacks a unique architecture style. It’s a conglomeration of buildings with different age, style and height, standing one nearby another. However, sometimes you can find a very interesting compositions. In the rest, as it happens in every old city, everything has mixed here – 100 years old brick houses, concrete buildings of 1970s and of course, modern skyscrapers made of steel and glass. 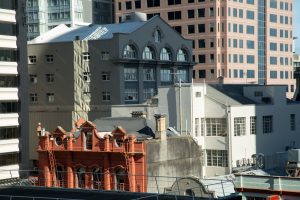 After having my lunch, I went down and made a few shots of construction machineries. A truck driver came to me to ask why I was making pictures. We had a small talk, then he went back to his truck and I went to the office. 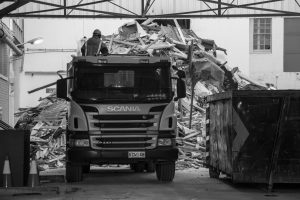 And yes, we have got mega-construction works in Auckland as well! Two years ago city council started building a subway in Auckland. So the most part of Albert Street is now half-blocked. Two years before that, Auckland Transport finally replaced diesel trains by electric ones. So, it’s a good news, indeed. One day I’ll definitely post some pictures, I made from construction site. Subscribe for email newsletters and stay tuned! 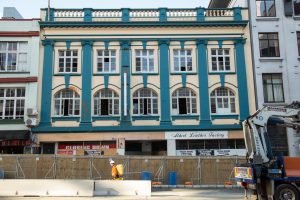 During the last half a year we had a clog piles machinery working just in front of our office windows, strengthing the soil before they could start digging a tunnel by using excavators. Seems like the old block of 6-7 storey buldings down the street will be demolished soon. It would be sad. One of the best foodcourts in the whole CBD is located in that building. 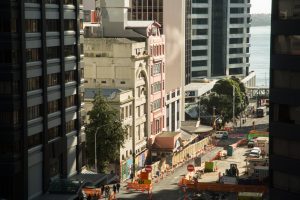 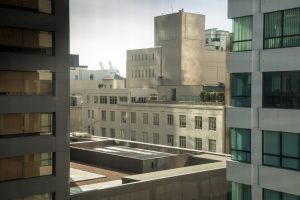