Not a good idea to go into Auckland Domain Winter Garden at lunch time to watch blossom of world’s biggest flower (especially and thanks to the local news!) after everyone is infomed about it! I was surprised to see a big queue but it was too late to change my mind so I decided to wate for an hour and half and see how it goes! 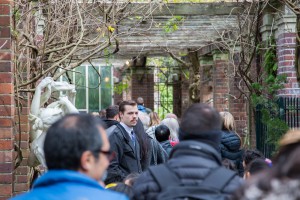 People were standing in the line asking each other: can you smell it? -No, my nose is blocked, I can’t. -Oh, happy you! 🙂 The first of its kind to flower in New Zealand, the titan arum, as it’s commonly known, hails from the rainforests of Sumatra in Indonesia. Strange and unpredictable, we wait each year to see if a flower will emerge.

It is also known as corpse flower, due to the powerful rotting flesh like stench it produces when it begins to flower and attract pollinators. 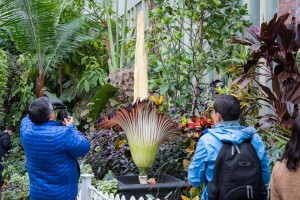 The corn or bulb produces a single leaf the size of a tree each year. For seven to 10 years it goes though a lifecycle of leaf, dieback and dormancy. Then a bloom may appear. 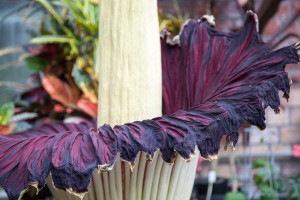 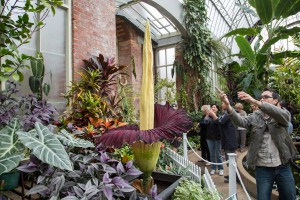 The corn of this Amorphophallus titanum came from a plant exchange with another horticultural specialist and has been nurtured for five years here in the Auckland Domain. We estimate it to be about seven years old. This particular plant flowered for the first time on 1 December 2013. 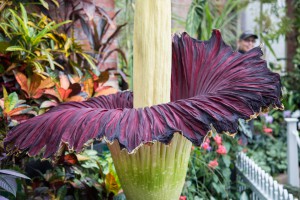 Blossom of corpse flower takes 72 hours, so hurry up! I think, tomorrow will be the last day. Open from 9AM to 5PM.