In October year before last we visited our old friend living near Raglan. Previously he was telling us he was going to leave his IT job in Auckland, pay off his mortgage and move somewhere in a countryside. Finally he did it: he quit his job, sold his house in the city and bought another one with a decent land section in a classical New Zealand outback. 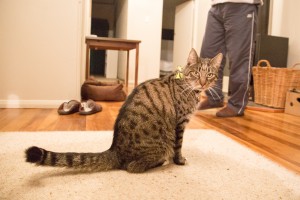 Originally our friend was looking for a house in one hour driving from Auckland and was very interested in Wellsford however, changed his mind later because of high price rises and as a result, bought a house in Waikato regeon. Actually today I just want to show you a few pictures from a village and share a few thoughts with you. So, feel free to press Share buttons below – if this post becomes popular I’ll create a new tag and post countryside diaries on a regular base.

Chapter one. “The House”

We left Auckland as usual, after 8PM to avoid Friday traffic jams, arrived to the village around 10PM, unboot the car, had a cup of tea and went into bed accompanied by cat’s croaking and logs crackling in the fireplace. To be honest, sleeping in a village house after two and a half years of living in 1.5 million city was quite unusual – can you imagine, you come to the window, open the curtains and you see nothing, just top of the trees in the nearby forest and heaps of very bright stars on the sky. 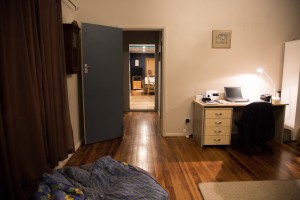 Surprisingly we slept very well in a new place after having a night road driving.
So as soon as I woke up, I got my camera and continued making a pictures. Actually the house was built in 1940s and represents a renovated classical weatherboard itself or, to be correct, two joined weatherboards. Despite a recent renovation, you can realize you are entering an old house with the old wood smell, creak of wooden floor, old wall clock, furniture and other old attributes.. Some windows frames still have original forged lockers! 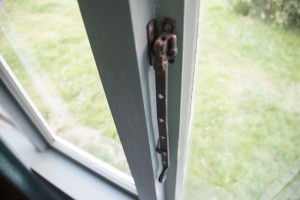 The fireplace. There are different CO2 normatives in New Zealand depending on a size of your land section. As far as I know, the owners of 2 hectar land section don’t have to worry but all the rest recommended to use special fireplace with a better filtering system. If you missed that somehow – New Zealand private houses don’t have central heating system. For example, night temperature during winter months in the regeon our friend is living can go down to 0 celcium degrees which may lead to water pipes freezing and blockage. On the left – there is a cat door, embedded to a glass window. 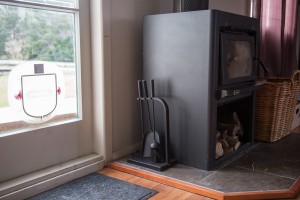 Bathroom: a shower, a bath, sink and a toilet you can’t see at the moment. It is 8AM now but it is as light as a day because of the sun tube installed on the ceilings which is quite common in New Zealand. In addition to electric lighting, a very powerfull heat lamp is installed all together with ventillation – as you remember, winters in New Zealand are very wet, consequently mold can be growing very fast in a bathroom. 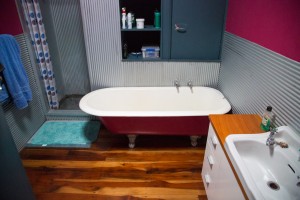 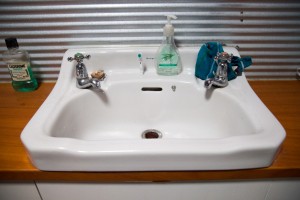 The “sheep” woke up and was waiting for something tasty to munching on. P.S The mountain you can observe on a background is a private. Can you imagine that? A whole private mountain!! o_O We’ll definitely hike at the top of that mountain someday, I promise. 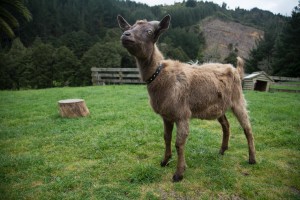 A deck, bbq and a few chairs you can seat on and observe one million dollar view.. What else do you need if you have just retired? 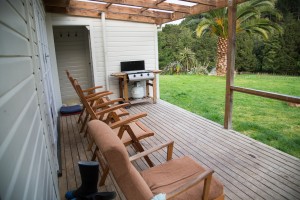 A view of the house from backyard. Very simple but nice. On the right you can see australian eucalyptus or gum trees. On the left there is neighbours hills with a few cows and horses. 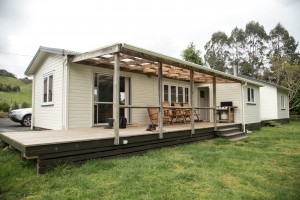 A water tank with rainwater. The majority of New Zealand countryside houses do not connected to central water system, don’t have wells and hence have to collect rainwater. The water from these tanks is pumped to the house water tap by an electric pump. These two contain approximately 40,000 littres of water. 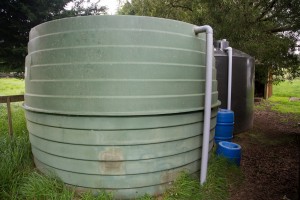 There is a small filter on the output of the water pump. My friend checked it a number of times, but there is hardly anything in it. He have also looked into the tanks through the inspection hatches on top. Hardly any debris on the bottom. He guess his crude mesh system for catching leaves before they get into the down pipes from the gutters must be working. He periodically cleans those out. The sewage goes into a septic tank under the paddock where Bertie lives. Hopefully he doesn’t mind.

Another view of the house, my Subaru and a garage with shed I would call as “my dream workshop”. Despite the middle of October, my Forester still has a roofrack attached to the top and I still have a hope we can organise another snowtrip and finally close this year’s winter season. 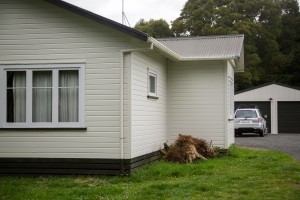 That’s it, folks! Grumpy Francis Bacon the cat is sitting near dining table and awaits for his meal. Ask your questions, post comments. Any activities, which can relief existential crysis of author, temporary living in a countryside during the long weekend is much appreciated. 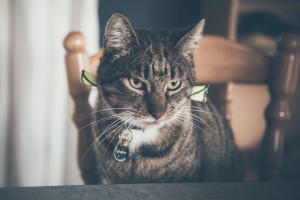