The continuation! No one has answered car’s name and model, though not a big deal. Behold a new category in this blog with a new pictures from a garage shed I’d call as my dream garage ) 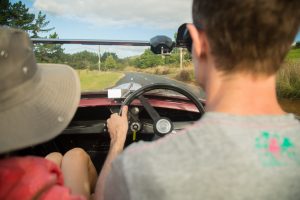 The car, which I had a chance to drive last time we visited our friend, living in a country side – is a 1938 Morris 8. Two-seat “sports” model, which means it is open-air, with a fold down hood. Which he bought in January 2016 and although it had a warrant of fitness and registration, he brought it home from Auckland on a trailer. Just to give you an idea, it takes two and a half hours in average to get in Raglan from Auckland on a modern car. 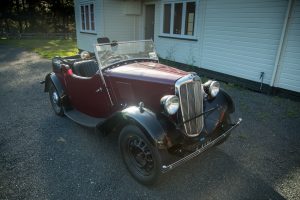 He had been told that the car, and particularly the engine, had been reconditioned, so he naively thought that he would be happily tinkering with a few things and having fun driving it to the town center to do the shopping etc. However, on his first trip, it broke down only 2 kms from the house and he had to ring his neighbour to come and tow him home. The petrol pump had failed. 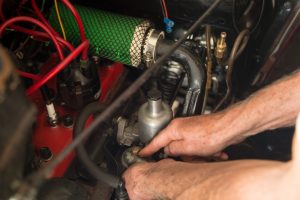 The engine was pinking and he discovered that the previous owner had put in long-reach spark plugs, whereas it required short reach. A new petrol pump and a bit of tinkering got the engine going better, but it was still too weak to be practical for driving up the hills in this region. 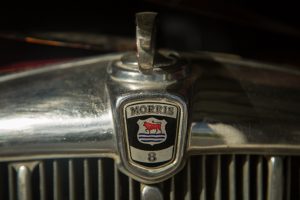 The compression was quite good so he wondered what the problem might be. He did some research and discovered that the specification for the engine was only 23 bhp when new. This convinced him that installing a different engine would be more effective than spending money on the existing one, which incidentally was a side-valve design. 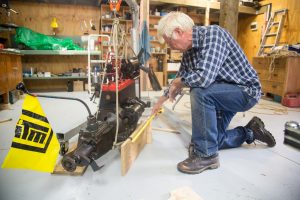 Meanwhile, he had bought some 6 V LED bulbs specially made for vintage cars by a place in England. He also planned to fit indicator lights to replace the ‘trafficators’, which are those illuminated arms that flip out on vintage cars. While installing the indicator lights on the front bumper, he just couldn’t get the level to look right. 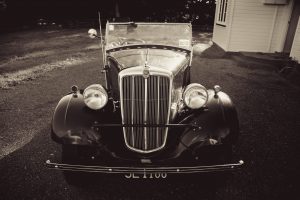 On further investigation, he found that the car itself was leaning over and to counter that, someone had bent the bumper brackets so that the bumper was horizontal, even though the car was not! On further investigation, he discovered that two leaves on the front right leaf spring were cracked right though and hence the car was leaning to that side.

Given the things that he knows now, he can’t understand how the car had got a warrant of fitness; it must have been a dodgy deal.

Anyway, the story more or less follows the same trend all the way — he investigates a part and finds it has been poorly repaired, or painted over, and then he set about fixing it properly. He took everything to pieces.

He had to throw away the old chassis, and was lucky to find another one, which was in better condition. Since then he has been building it up piece by piece. 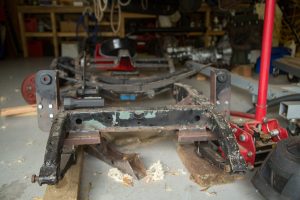 The bodywork is made of steel skilfully curved around a wooden frame made of ash. Of course he’s discovered that the wood has been attacked by worm and rot over the 80 years, and so he’s having to replace most of it. It’s difficult to buy suitable wood to replace that now. 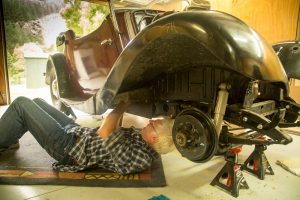 So he bought a couple of old beds on Trademe, which are made of oak. Both had very large, traditional headboards, which have provided enough wood but he needed to laminate pieces together with epoxy resin to achieve suitable thickness. 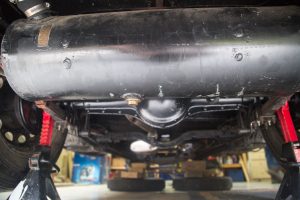 The other challenge was to cut the compound curves necessary for the shape of the car body. 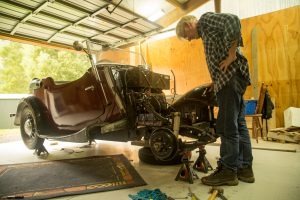 His neighbour lent him an old bandsaw, which turned out to be a bit like the car — just about everything on it was broken and it took two weeks full time to get it running smoothly and effectively enough to do the work! 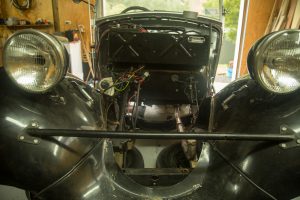 Then he bought an old 1962 Morris Minor, which has a 1098 cc overhead-valve engine, and he has installed that engine in the Morris 8. He has recently had the new engine re-bored and new valves fitted. 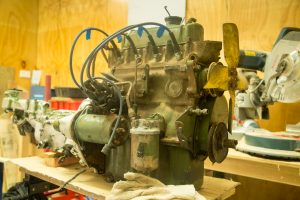 The specification of this engine is 45 bhp. That’s puny compared to modern cars, but still it’s nearly double the power of the old engine! 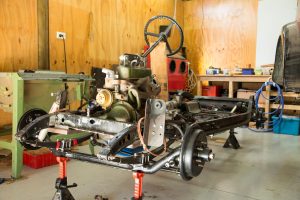 My friend says he would have found the sheer amount of problems depressing if it wasn’t for one critical and unexpected factor. 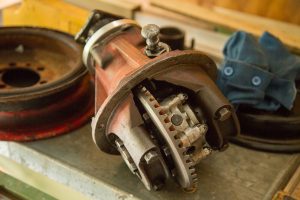 It so happens that many other people in NZ fell in love with this particular Morris car and have formed clubs to support each other. 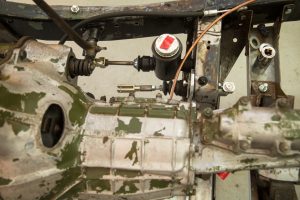 There is one in Christchurch, one in Auckland and even a small club in the Waikato, based in Hamilton. Both the Christchurch and Auckland clubs have parts sheds, which the club owns and in which they collect spare parts for these cars. 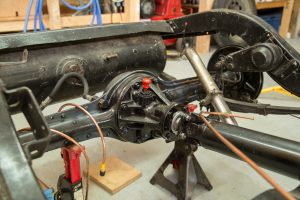 A few dedicated members spend time dismantling old cars and collecting useful parts, which they can then sell to other members like him who have a need for them. So it turns out that right here in NZ there is a ready supply of second-hand parts for the very vintage car that he bought. 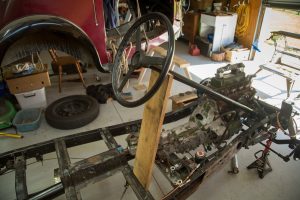 Also, lots of enthusiastic owners with heaps of experience and advice on how to overcome the difficulties. They are the ones who have supported him and kept him going on this project. 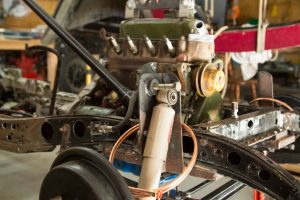 At the end, he will have spent more money on the car than it will be worth if he wanted to sell it. But he thinks he’ll be happy with the end result when it’s finished 🙂 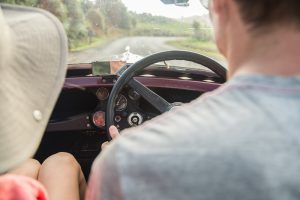