Meanwhile, Civil Defence advises Kiwis to be prepared! According to last forecast tracks, super cyclone Pam is expected to hit East Cape on Monday before passing Chatham Islands. So people of Gisborne, East Cape and Hawke’s Bay should monitor weather forecast and be prepared to strong winds, large waves, coastal errosion, rains and power loss. Make sure to tie down anything that might fly away, get enough food and water for three days. Also, areas north of Whangaparaoa and on Great Barrier have a real chance of river and stream flooding. 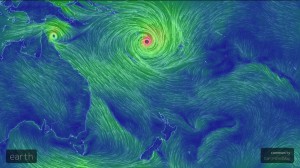 If you take a look at current direction of cyclon you might say that it will go straight through North Island, but it is expected that it will be affected by strong jet stream high in the air from Australia and will move to South East. Well at least it is expected. This morning, Cyclon Pam status was upgraded to 5th category cypercyclon, the biggest that had been seen in the Pacific in 30 years (try to google for cyclone bola). Vanuatu Islands will be under damaging winds of up to 200 km/h were expected to lash the island nation overnigh. Winds from Pam may have sustained speeds of 280km/h at the centre with gusts over 330km/h. Islanders already called it a monster storm.

Looks like beginning of next week will be “promissing”. I better check my emergency survival kits, torch, radio, food and water. It might be the same as when we had cyclon Lucy – when we were prepared a lot, but actually it wasn’t so critical. Anyway, people have enough time to prepare.

You can watch Cyclon Pam by this url in real time.
Also, check twitter hashtag #CyclonePam
See ya soon and have a good weekend!