Morning is time of the day when I have smart thoughts, cool ideas and other stuff.
Sometimes it happens so fast and they are so detailed so it make sence to write them but at the time when I finish my working day and come back to home.. It’s too late! More than half of everything I had in my head in the morning is disappeared by the end of the day or I lost context and can’t be as creative as I was before.. 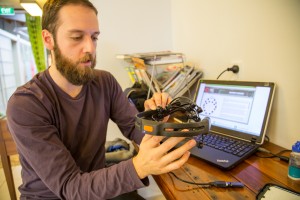 Here and now, to prevent losing my thoughts, I’m sitting in a bus and typing them in my laptop while going to my work.
By the way, to avoid road sickeness on bus while it’s going through very steep and windy Ellerslie hills, I use 10 fingers typing and watch straight for the direction of bus driving – it really helps!

I think, something can be simplified here – I mean we should wear some kind of a small headband, concentrate, think and produce centences, which are scanned and recognised word by word by device and then synchronised with your smartphone or laptop. It would be very popular among journalists, writers, bloggers, artists and let’s be honest, among everyone.

You may think, it’s impossible? Well, 15 years ago human voice recognition was impossible, but now we have heaps of services helping us to transcribe voice into text in addition to free Google voice search which is available on almost every Android smartphone.

Now we are ready to move to our next topic – inevitable human cyborgization, implicit one through auxiliary external devices, and explicit through implanting various sensors and gadgets.

Let’s talk about human speech apparatus. How many words can you speak per minute to be understand by the others? Comparing to resources ans speed of human brain it’s so slow so it even worse than a floppy disk.
Think about it – you are receiving a call from Chief Editor and he asks: “When are you gonna finish an article? We are almost ready to send edition to the printer!” And you say: “5 seconds please, I’ll send last part of my article straight in your brain – Pshhhkkkkkkrrrrkakingkakingkakingtshchchch … and you actually send it to him 🙂

Telepathy, as people knew about it 50-100 years ago, will come true by sending thoughts via space using auxilary devices and, most important, by sharing access to thoughs and ideas, which will increase and improve productivity of a single individuum and a whole team. Of course, people also need to think about muting, bans, permissions and other security stuff on a completely new level, but I suppose we don’t have to affraid rise of machines or Artificial Intelligense as they said, but we have to affraid people with extended abilities (cyborgs) AND bad intentions.

Now imagine, what quality of media content is waiting for us? Modern DSLR cameras have 20 Megapixel matrix in average, which is equivalent to a picture of 5 thousand columns and 3 thousand rows in whereas our eye’s capacity (human eye resolution is 576 Megapixels) and our brain power is a way bigger! Would you like to watch a real-time first person view streaming from Everest mountain as it has been seen by a climber? 4K sucks!

And I haven’t mentioned yet about distributed data storage in human brain! I suppose, at some point our descendants will be paid for storing and processing the information. Cloud technologies? What are you talking people? What an anachronism! 🙂

What about storing the whole mind of a person, waiting for a transplantation into a new body? To manage copy and paste of a such enormous big data we need a whole cluster network of another living individuals, but in general, as I see, such a technology will be just a next step to immortality. The universe in habited not by sentient, but by immortal sentient. And human being in my opinion is able to workaround existing restrictions in contrary to evolution concept.