When I did skiing on Mt Ruapehu in August last year I was surprised why people are going on top of the mountain with snowboards and skies if they can use chair lifts? As I discovered later, they were walking up not for skiing but to see acid lake inside summit crater! I was so inspired by images I found on internet so I decided to hike on top of the mountain as well and started preparing. This Saturday was my 5th day in this season and also it was a day when I managed to do curvings on snowboard. Actually I was pleased when two my friends, advanced boarders, said that I’m making a progress even faster then they did when they were beginners, so I decided, it’s time to climb 🙂 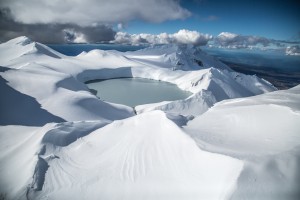 Weather forecast for this Sunday was cloudy, windy and rainy but surprisingly it was even better. At least in the morning when we had almost no wind and clean sky. Unfortunately none of my friends agreed to go with me because of pain in the ass, lazyness and something else I don’t remember at all. I was going to have a lunch before climbing but I changed my mind right after I got my camera and bottles with water from my car – I was afraid the weather could become worse, so I went straight to Movenpick and Highnoon Express chair lifts. A picture below shows you the beginning of climb: I walked around 10 minutes and sat down to have a rest; put my snowboard on slope, got my camera from backpack and made couple of pictures: 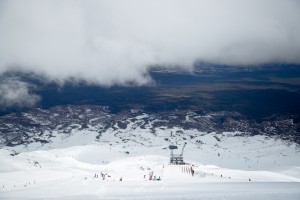 After another 5 minutes of climbing I made second stop, going up was getting harder and harder. To be honest we are quite lazy this winter and don’t go for hiking, don’t run and don’t visit Gym 😐 I was able to see two snowboarders and one skier somewhere in the middle of mountain and also group of mountaneers close to the summit. I thought skier and snowboarders have sat down and didn’t climb for the last 10 minutes at all. 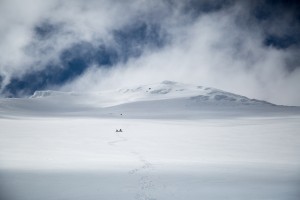 Weather is brilliant but snow is too solid and slippery so it becomes quite hard to walk and now I understand why these guys lean on snowboard.

Wow, looks like we got new desperate climbers! I think they are skiers.. Or snowboarders. Really there is nothing to do with skies here because of snowpack. If you can lean on snowboard skies will make climbing harder. 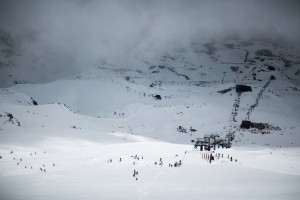 Guys sitting above on the slope decided to go down finally. I have stopped one of them and he said they have reached half of climb and decided to cancel – too icy. Well, now I know what he mean climbing is getting worser and worser, will see how it goes further, but I really want to reach summit. Good news: my backpack becomes lighter because I drink water quite actively, probably at the time when I finish my climb there will be just my DSLR only. 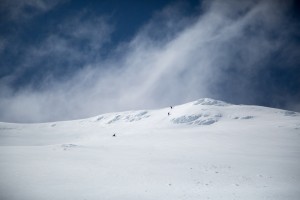 Another skier also put his skies on feet and went down, I stopped him and got an update: it’s very icy up there, three mountaneers are trying to climb for the last two hours. -May be they’ve choosen tough route? -Don’t know. Finally I have met three people for last half an hour who changed their mind and turned back; who were panicking about impossibility to go up and regreting about failing to manage visit the summit. Well, not the best motivation, I’d say! I have only one thoughts in my head “I so freaking tired!” and I still have to climb at least 250 meters to the top of Mt Ruapehu. Don’t know, don’t know.. Chineese guy whom I spoke recently told me there is nothing to do without ropes, crampons and mountain gear.. Nuff said! 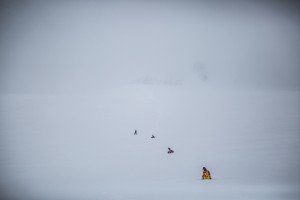 In meantime I was covered by cloud approached to me from west side which decreased visibility down to 50 meters. I have decided to wait other climbers – honestly I have tired to make stairs 🙂 It was also unclear what weather should I expect. If the main goal of climbing is to see crater lake and make cool pictures there is no sense to continue in such a case of bad weather. 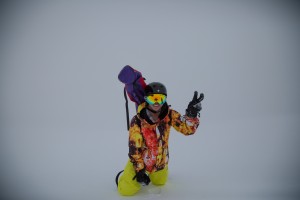 I have wellcomed another climbers – Dong and the others are students from mainland China. I said probably we have to stop climbing and better go down – visibility was very poor. They agreed that we have to turn back and suggested may be another day will be luckier. I was trying to put snowboard on my feet with their help but it didn’t work – it was too steep; how suddenly we got strong wind from west which blow away all clouds around – we continueing! Surprisingly, solid snow become softer and we could climb without slip! 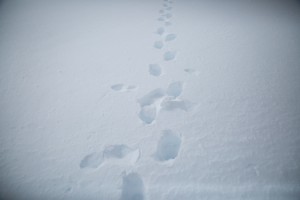 Dong is shouting that I’m climbing to fast and he can’t keep the same speed. Not a problem, I let him go and took another two shots. In the same time, I finished first bottle of water. Unfortunately, after 50-60 meters we got snowpack again:

Mountaneers managed to finish climb and hide above the summit already:

I have turned back to see how far we climb and it seemed to me it was nearly a half: 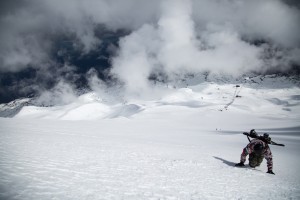 Another guy, snowboarder Ben fall behind. Somehow I had a feeling soon he will say: guys, go on, I’ll wait for you here, make some pictures to show me after 😀 Actually I lost and couldn’t see another two climbers:

I shout to Dong that we have to think wisely about the strategy how we should climb further otherwise we can fail. I thought it was better to turn left to climb diagonally and then turn right what we both agreed. Mountain is very high. We have almost finished, almost! Another view to the valley: 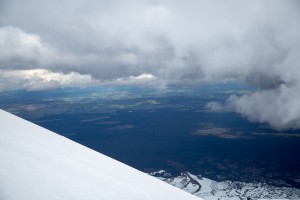 That how we do climbing! Making a stairs for each step. I was wrong thinking it would be hard to climb if you are skier – actually skier boots are much narrower which makes climbing easier. For example, I have to spend more time to make stair with my thick snowboarder boots before going to next step without any risk. Soon we will reach the area with a soft snow. I was slippering few times but was in time to react and lean on my snowboard. 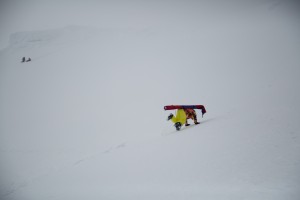 Mountaneers appeared from the summit. I think they spend too much time to climb not because it was hard but just because this a part of some training: 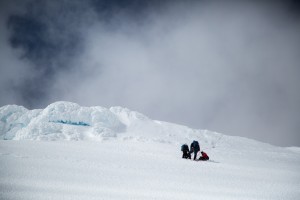 Earth is round! Finally, just few minutes left until we reach summit! 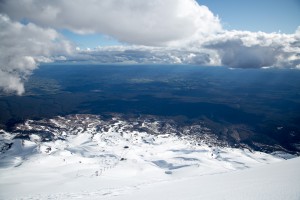 Yeah, we’ve made it, finally! 3 hours, 3 longest hours! Here is our main goal: crater of Mt Ruapehu and crater lake! Active crater is very deep and located between peaks and fills with a crater lake between major eruptions: 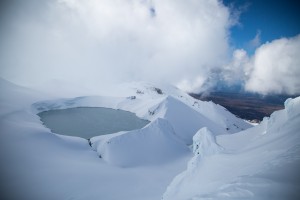 You can see east part of National park Tongariro and few mountains covered by snow:

Southern slope where we came from: 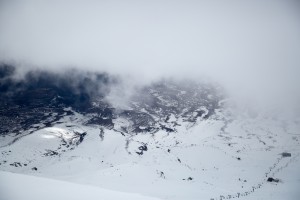 Suddenly weather got worse again and the summit was covered by clouds: 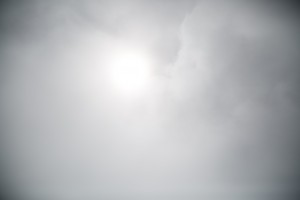 Crater was hidden by clouds as well. We were very upset and decided to go down in 5 minutes and then in another 5 and then.. Don’t know how but we spent 40 minutes there waiting for clear sky: 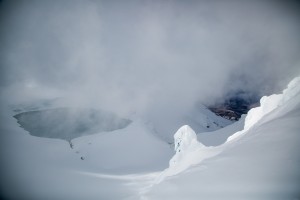 In meantime, another guys managed to climb and joined us 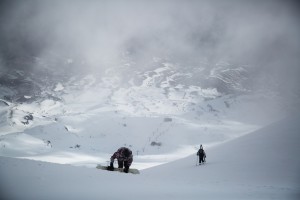 Sky become clean and we saw crater lake. I thought it is possible to go down to the water and then climb back. I expect stereotype questions, like: did you guys swim in that lake? -Nope, we didn’t.

The lake and the crater are very dangerous. Mt Ruapehu is an active stratovolcano and can errupt in any moment. In 1953, volcanic ash dam blocking the lake outlet collapsed and caused a lahar collapsing Tangiwai railway bridge across the Whangaehu River just before an express train crossed it leading to the biggest New Zealand disaster with the total loss of 151 lives. Last major eruption was in 1995-1996. The lahar finally occurred on 18 March 2007. Every year, Department of Conservation receives different warning sign from warning systems, e.g increasing temperature of water in crater lake, chemical changes, gases, small earthquaqes (2.8) and eruptions: 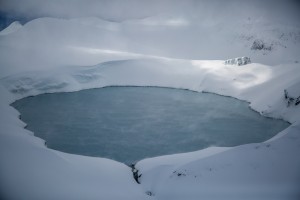 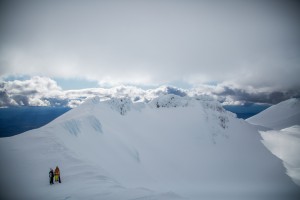 We didn’t want go down Turoa ski field but we had to. Actually, you can go down to Whakapapa, it’s up to you! 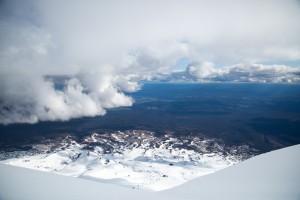 Afar you can see Lake Taupo: 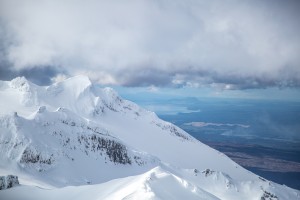 It was really awesome! Altitude: ~2797 meters. Then I put snowboard on my feet and went down which took just 9 minutes: 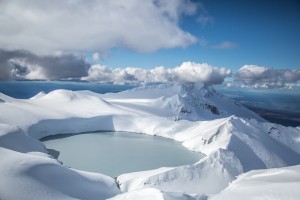 Thanks for staying with me and see you next time!