I suppose all of you fed up of these posts about snow activities, some readers who were desperately waiting for Subaru or Kawasaki maintenance articles even unsubscribed from this blog, but! Today I will tell you how you can get into troubles and become an eyewitness of story which was meant on local news. Weather was really good that day – warm, sunny and zero wind so even lifts were working until 4:30PM instead of 4PM as usual. I got onto last Highnoon express and then heared an announcement about snow storm coming: it was said, if we don’t wanna stuck on the mountain, we better get out of there! 😮 -Ooook! 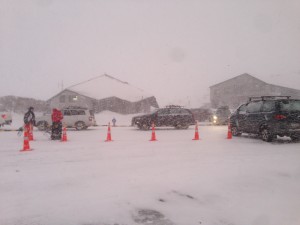 Suddenly the weather got worse and worse – it became windy and snow started to bucket down so you could see how new powder borns! I think somewhere in the middle of mountain, near Giant cafe visibility became really bad so I couldn’t see anything and had to rely onto my own vestibular system – hmm.. looks like here is too steep, and here is ok, I’ll go there!. Even goggles which gives you some contrast was useless that time.

I was really sad for that guys who decided to climb up to the summit of Mt Ruapehu an hour before last lift departure. I think there was nothing to do without flash lamps. Moreover some tracks of Turoa skifield are really dangerous – rocks, stones, ice blocks and cliffs. You can easilly get involved and appear at very steep slopes! I do remember I saw a guy earlier that day who became stuck near very dangerous cliff trying to get out back up to the hill within an hour. -Are you ok? -Yes, I am! -Do you want me to call for resquers? -No, I’m good! Also, there was a case on Friday, a women fell down from 30 meters doing skiing and then was evacuated by helicopter to hospital. Usually there at least few incidents on the mountain each day.

All right! I came off to the upper carpark and was told by my friends about traffic jam started at 4:30 so even if I decided to skip last Highnoon Express it really didn’t matter. Well, who knows! We left the carpark after 5PM and were staying without any move then for next hour and had no idea what happened and why there was traffic jam. Then some Mt Ruapehu staff told us they have to send technical vehicles, clean and grid road surface because of snow storm and strong wind. I asked him how long it will take in his opinion, 5 hours maybe? -Nah, it should be two hours maximum, he said. Hm.. Honestly I was expecting one hour, we already started to plan what is the best place to stop for a dinner and now we have to delay it or even cancel. Also, I was asked to keep the distance and drive on right side of the road.

Guys were kidding that we have so much snow on the road they can do snowboarding and get to the village faster then any cars here. Next hour we drove down just for 600 meters and then we got stuck again for another hour! I asked Mt Ruapehu staff why we have stopped and what happened? -People stupidness!, was the answer. We supposed, there was a woman in huge SUV scared to death and screaming: I’m not going to drive down the mountain! I’m not going!! 🙂 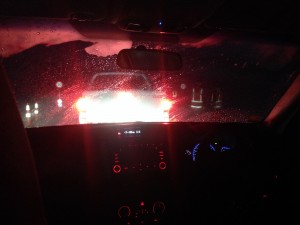 I had only 22 littres of petrol in my gas tank, moreover, average fuel consumption increased from 9 to 10 litters per 100km, so I stopped the engine, and turned lights off. We were sitting and listening sounds of wind, feeling how it sways our car. Guys became hungry, Egor found food leftovers from the boot: some crackers, ham, milk, cheese, apple and something else. So when after sometime some staff member came to us I felt very sorry for her – there was very windy and cold outside but it was prety warm and smell good inside our car. She said there were few accidents below, some cars were skidding and lost control. -Four-wheel drive cars were skidding, seriously? -Yes, we are trying to pull them off and clean road, this might take another two hours.

My friends started panicking for my battery. I told them my car is nearly 5 years old and I never replaced the battery 😀 Then I started engine and drove few meters because tire flats was completely frozen to ground.

We finished crackers and ham and continued discussion with conclusion if something like this happenes in Russia, drivers will not seat in their cars, waiting for resort staff members, special forces, or prime minister on helicopter, they will just help to themselves and each others. Sometimes New Zealand drivers don’t have responsibility for its own actions.

The fact is in Russia you can easily learn few more rude words about yourself just because of:

Disciplines, isn’t it? Here in New Zealand people are so relaxed sometimes so they driving without any respect to another drivers. And they won’t ever know about making something wrong because no one will tell them about it – people are very polite here and this is true. Saying “something wrong” I mean coming off Mt ruapehu at 3kph speed on a rear-wheel drive sedan without any chains! on it during blizard making a huge jam of SUV cars behind. Man, you better buy 4wd or use shuttle bus! By the way, we saw 1997-2000 Subaru Impreza skidded on road side, but most of these trouble cars were just usual cars, or may be I just haven’t seen another 4wd ones. Also, there was a helicopter rescuing a man injured as they said on a carpark. Closed roads meant an ambulance was significantly delayed reaching the scene.

We got in Ohakune village arout 10PM, got our car fueled on BP, then we drove 5.5 hours to Auckland plus another hour to deliver everyone to his place – finally I went to bed arount 4AM Monday. Palms, subtropics, paradise? This is New Zealand, my friend, it may be dangerous! :grin: