I was told about this track by a friend who lives just 20 minutes driving from it, approximately. And I have to say I wasn’t impressed after reading the track description on the Department of Conversation web site. Still we were curious enough, so we decided to go. Without any regrets! 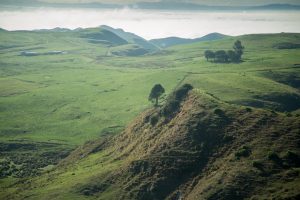 We left at half-past eight in the morning in order to have enough time to walk both nothern and southern part of the track and finish around late afternoon or at least, before dusk. Let me introduce you – Badger. If I’m not mistaken, our friend gives name starting with ‘B’ to most of his pets and animals. Any ideas why? 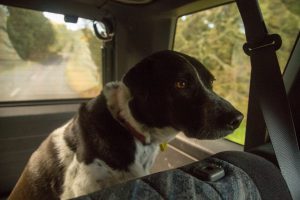 The dog accompanied us for a short drive only. He couldn’t walk with us for a simple reason – all the dogs are banned from the track. Our friend gave us a ride to the start of the track and was going to pick up us a few hours later, at the finish.

The beginning of the track is located nearby Hamilton – Raglan highway, at the top of the mountain pass, to be precise. Love this place – at some of the turns nearby this pass it is recommended to slow down to 25 km per hour. 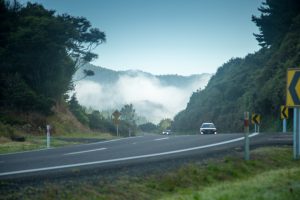 For the first 15 minutes track goes through a typical New Zealand forest – so you just need to walk on a gravel path surrounded by ferns, bush and other local trees: 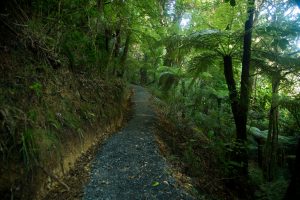 Then you reach an open space where you can observe local hills coverered with pine trees in the North, 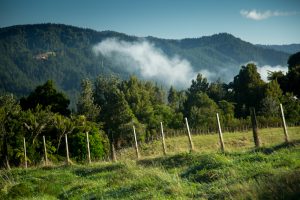 mount Karioi (one of the main landmarks of Raglan) in the West: 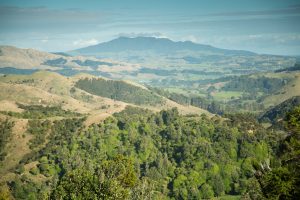 and a valley in the East where Hamilton city is located which was still under the thick layer of fog around 9AM: 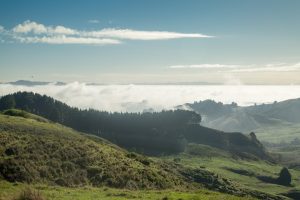 and of course, endless limestone hills on South, cut with a dozen of trails made by sheeps and cows: 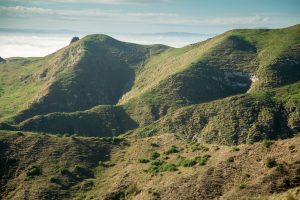 Track goes from North to South and crosses a private farm, so the views are quite picturesque: 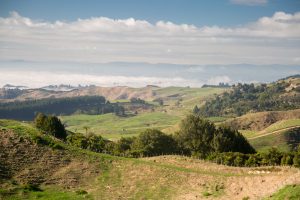 It goes mainly on the tips of the hills and has a few moderate ascents and descents you have to walk through: 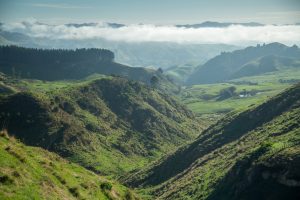 Have to say, some hills nearby are quite steep, so you have to be careful and stay on the track: 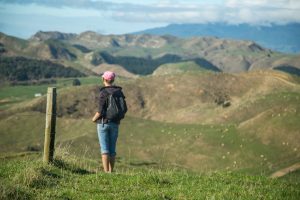 Half past nine in the morning. The fog above Hamilton is still there: 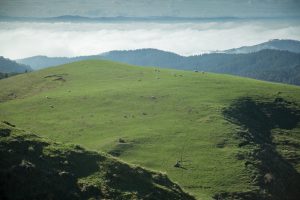 A view of Te Uku wind farm in the West, with a few bike trails around it. I might need to look around, do some search and finally buy my own bike, so I can go for cycling and discover other parts of the country I’ve never been before. Will appreciate any recommendations if you have any. 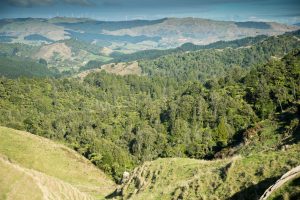 Right behind these hills you can see southern part of the track. Much more hilly than its counterpart: 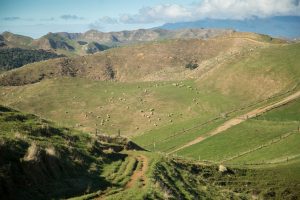 The farm is split into a few paddocs by wire fences, some of them are electric and can shock you while being touched. It is not too painful but, painful enough frighten a ship or a cow who decides to cross it. To go further you need to walk through a gate (if you see any) or use a special ladder you can climb on in order to cross the electric fence safely. I would say it is quite common solution for a whole country: 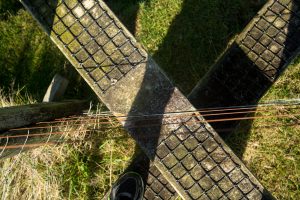 In order to drive truck or any other vehicle, almost every paddock has larger gate: 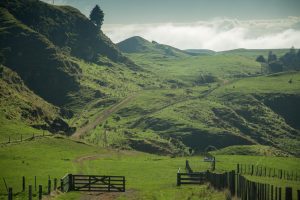 While I was making photos, I saw an idillic scene when a stock of sheeps (probably couple hundreds or even more) was moved from one paddock to another by a farmer and his dogs: 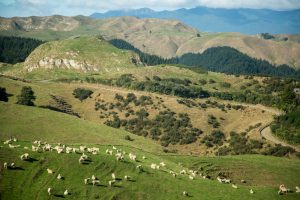 Franky saying sheeps are quite timid animals and were running away as soon as I got closer to them. Closer than 50 meters: 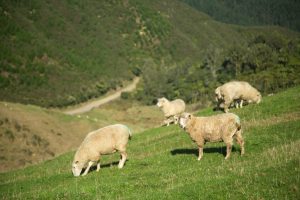 Here comes the farmer, who owns the farm and most of the land you could at see at these pictures. As far as I understood his grand-grand father came to New Zealand around 150 years ago, bought the land from locals, cut the forest and founded the farm. 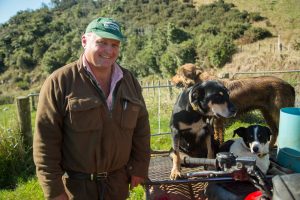 Bruce has kindly apologised for any rude words we could hear while he was yelling on his dogs while driving an ATV. As he explained, dogs act much better when you speack tough) Don’t remember if I heard any F-words to be honest, so I think he was joking)

We had a very nice talk for a little bit, thanked him for the opportunity to cross his farm, said goodbuy and walked further to the Southern part. So it took only 90 minutes for us for the first half of the track. 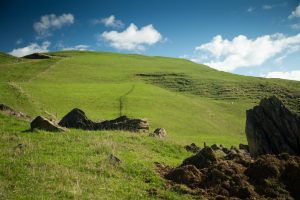 P.S I know that my blog is being read by a few fellow New Zealand readers – flick me a message, if you keen to go for a short hike somewhere around the country before the winter, while we still have a good, warm and sunny weather.