Few days ago I went into garage and saw something big and green sitting at Forester’s hood. I came closer and recognized praying mantis!! First time I met praying mantis as soon as I arrived in New Zealand, at the same time of year, at my friends bbq, but it was small and dead despite having head. I have never seen praying mantis after that for another two years, so I even forgot that we have them here. 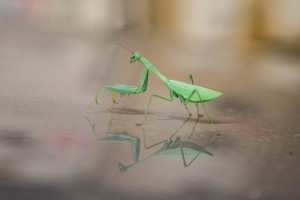 Comparing to previous one, this praying mantis was huge, bright green and most important it was full of energy and curiosity to his own reflection at hood and camera lenses. I think it was female, according to big tail and slow walk. As I understood, praying mantis can run pretty fast and also, they can fly as well for a small distance. 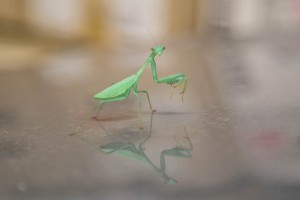 Have you heard that since people occasionally introduced Southern Africa praying mantis in New Zealand, local males lost their heads and prefer females from a hot continent? Hard times came to New Zealand praying mantis females: first of all male was stolen, and secondly he was eaten as well! 😮

I think that reminds me something.. 🙂