One Saturday evening when I was sitting in lounge room with my laptop, something smashed in our window, squeaked, and fell down to the ground. I think last Christmas we got broken window the same way and replacement bill if I’m not mistaken around $300. I went outside to look around, window was ok, but there was unconscious tiny bird on a pavement. I took it in my hands it didn’t move so it wasn’t clear is it going to die now or later or maybe it will be ok after few hours. As I remember we had one of these coldsnaps coming when the temperature in Auckland went down to +5c or even below so I thought even if this bird will not be eaten by our neighbours cat, it will not survive cold temperatures. Recently I have read about yellow headed bird which life duration is just about 8 months (it will never have birthday party!) so I haven’t though much and started doing! 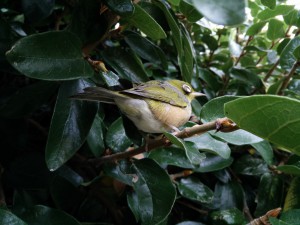 Well, I put it into cardboard box we got when we bought cherries, came into house and switched to another activities hoping that tiny bird will feel better soon. And it was – we heard some rustle around 5AM in the morning so I went out with the box around 7AM, open it and released the bird which flew away to the nearest bush, so I was able to make better photo. Later, I found out it is called sylvereye which sometimes shortened to white-eye and it is protected as a native New Zealand (and Australian) species. It’s length is 11 to 13 cm, and its weight is around 10 g. They perform a valuable service in gardens, eating harmful insects including aphids, scale insects, and the diamondback moth. However sometimes they prefer to eat grape, apples, citrus, feijoas, figs, grapes, pears and persimmons – they simply ignore bird nets! I think next time I will check with wikipedia before trying to rescue someone unknown, just in case? 🙂