Defenitely it was a weekend after that you need a recovery weekend! It’s not about amount of alcohol I drank, which I reduced for myself as a driver down to 0.3 bottle of beer and glass of wine per evening (moreover I was going to bed around 9PM every day), it’s all about 5 hours driving to Mount Ruapehu and the same amount of time to go back plus very active physical exersices on snowboard which made my body soo exausted so I was suffering from pain in my leg muscles until Wednesday. Also, my usual sleep mode hasn’t been recovered and I can hardly wake up around 8 o’clock in the morning. Another distinction of this trip from the others – I haven’t done much pictures as I used to have before – first of all, I was driving, secondly my backpack with camera was somewhere in the corner of my boot under another staff, thirdly I was going to learn how to do snowboarding so I do apologise, but I will write how-to article on another time which is going to be Unexpectedly on this Friday! 😀 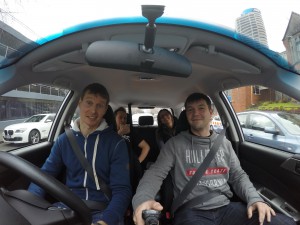 Actually that was our second attempt to go into mountains. First one was failed one month ago because there was not enough snow, if I’m not mistaken there was just around 40cm of base snow. So we had to move snow trip on another date and wait, checking the weather forecast and amount of snow on the mountain. Hopefully after mid of July situation changed and we got around 1 meter of snow on Turoa and 90cm on Whakapapa ski field. Weather forecast is just awesome for this Saturday but a little bit worse for a Sunday, anyway both ski fields are opened and here we go! We left Auckland at 12:30PM so we had absolutely no traffic on the way and we arrived into Ohakune village at early evening. I got a roofrack since last year which means all snowboards was on top of the roof but not inside of the car and it was very comfortable journey comparing to the last year trip. But this time Forester’s average petrol consumption per 100km increased from 8.8 litres upto 9.6 for the same amount of people and gear. We did our first stop in Huntly near toilets opposite to large gas/coal-fired power station on another side of Waikato river.

Cloudy, drizzling, fresh and light wind made you surprisingly happy because you just got a small road trip! We had different music, different authors and styles, different years and albums – everyone could connect his iphone or ipod through 3.5 jack pin to audio system. Talking to different topics, starting from skiing, snowboarding, everydaylife and other – we haven’t met each before this trip so we had lots of things to chat about – no wonder I missed exit from Express highway! As reward we drove throuhg one of Hamilton’s newly built suburb and watched a remarkable full rainbow starting on opposite lane ending somewhere on right behind greenish New Zealand hills. Then we had a lunch stop at Otorohanga, at small Thirsty Weta cafe where I got vege soup with smoked ham – yammi! 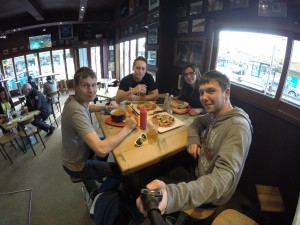 I have to say my personal thank you to friends of mine who made a booking – this shalet was very cool, big and cozy. I think at the time we arrived, someone turned on electroheaters, so we just started a fireplace, sat down and were drinnking wine, eating cheese and chatting while listening music. The rest guys arrived around 10-11PM – not everyone was able to get day-off after lunch. 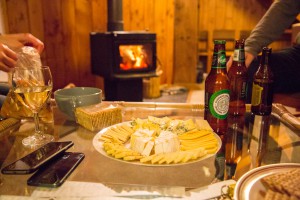 Surprisingly but everyone, including those who were drinking late, woke up at 6 o’clock in the morning, made a breakfast, coffee and tee, got their stuff into cars and left house around 7AM – we were standing on the base car park of Turoa Ski field at 8AM already, unloading snowboards and other gear from the boot. By the way, there was no ice or snow on the road and I think anyone were able to drive upon a hill without 4WD or chains – the only snow was on top, on the carpark. 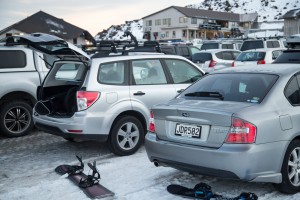 Hills near Mt Ruapehu higlighted by dawn reminds me Grand Canyon in Arizona: 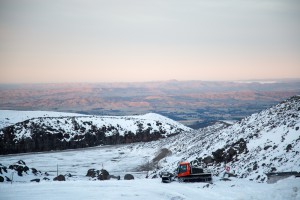 As well as expected for a beginner, I started with relatively flat Alpine Meadow track at the beginning of Turoa Ski field, near the lifts. Here on the beginners area people are lifted upon a hill standing on a conveyer belt which was malfunctioning due some technical reasons so I had to walk up for a few times. 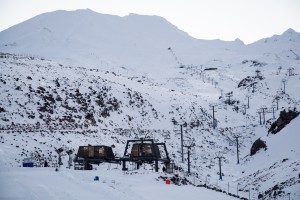 I spent around an hour to get use into snowboard trying to refresh my knowledge how to ride, make a turn, slow down and so on, and then Galina and Igor came to me and said if I go with them via Parklane lifts there is a better place upon a hill with a better slope and T-lift where I spent most of the day doing snowboarding and refusing any suggestions to go up or down – not today guys, may be another time! 🙂 The weather was really awesome – it was very sunny and warm there, with absolutely no winds, amazing! Base snow on Turoa was around 141cm and honestly, I didn’t notice any significant difference between that amount of snow and 2meters of snow we had last year. 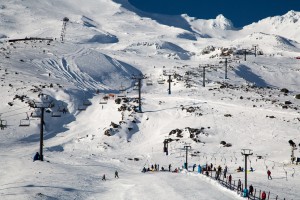 About snowboarding – I got some progress but it was a little bit hard to make left turns using front edge – I had slow down a bit or touch a side to keep balance. In addition, going straigt forward was not really comfortable. I think I got my right leg cramped after lunch. At the evening, when I decided to go down to the carpark, via narrow place where you can’t use back edge because there is just not enough space, I put my right leg in front of snowboard and I was able to ride straight without no worries! A small test with a gentle shove we did with my friends prooved I am a goofy guy but my snowboard was adjusted for a regular snowboarder. Well, nothing said, looking forward for next time! 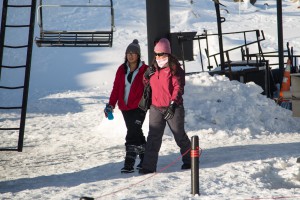 As a bonus here’s a small backstage video from a house and from the mountain: