Breaking news! Processing photos from South Island and Rotorua procrastinated again 😀 Last Saturday we were invited for an “easy and spectacular hiking” with overnight staying near Wairere falls, which is located just in two hours south from Auckland. We didn’t know exactly whether we are going or not until Marina finished and submitted her homework on Friday late night just in 5 minutes before deadline, in addition she has to complete presentation until Monday but at the last moment we decided that we can go for one day hiking without staying for night. Anyway, I put two sleeping bags in a boot. I still have no tent, so I had to borrow it from my friend. Event agenda was very promising: hiking to waterfall, sight seeing, swimming, staying overnight for a dinner with mulled wine because Lena, one of event organiser had birthday that day. Distance from waterfall to camp site is just 2 kilometers, so it was suggested to have cider, ball aaand attention, kayak! 😮 We realised that it was a joke too late, so we took our folding chair (fail number one) and ultrabook with some documents for presentation dowloaded in advance. I had almost forgot that when some of my friends write on Facebook about easy hiking they mean 3 day hiking for.. 80-90 kilometers! So at some point it was fail (as you guess not the only one), but anyway in general all was good 🙂 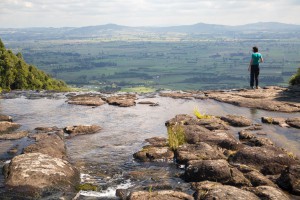 And here is the parking. If you switch map to satellite mode you can see waterfall on ranges, which separate Bay of Plenty from other part of North Island. I don’t know, how I could skip this place and have never been heard about Wairere waterfall? By the way, track is quite popular, as you can see there is shortage of car spots on parking. We left second sleeping bag in a car, because Marina was hoping that we will be back in Auckland at 8PM. As soon as Boris and Lena arrived (without their little dogs but we wasn’t even confused) we started hiking: 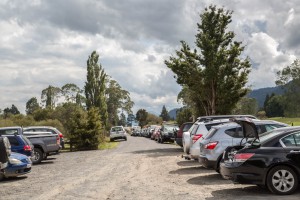 The track is well formed and goes through moss covered rocks and tree roots: 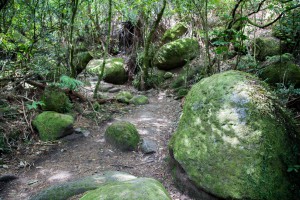 At some point it meets up with the river and bridges assist with river crossings. And then another one. And another. 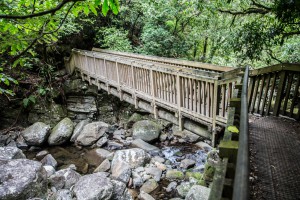 And another again. There are plenty of them: 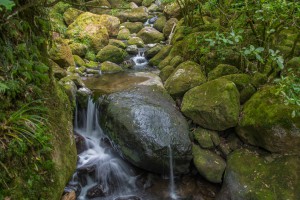 Trust me, there is nice there! Because track goes through the forest, it is quite freshly there: 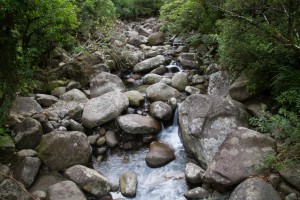 The only one thing I was worried about was mudflow on the opposite side of gorge: 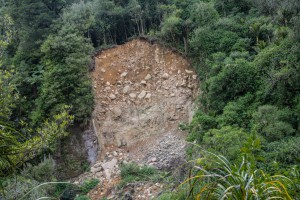 I understand that doc cares about safety and put everything to make it less dangerous for a hikers, by building bridges, steps, railings and signs, 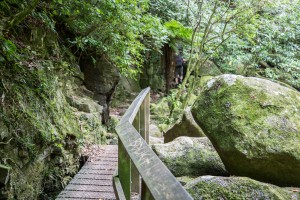 but I still was very concerned, especially in such places like this: 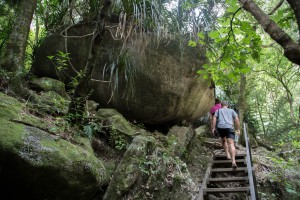 This fern trunc is saying: relax, ceep it calm, go ahead! 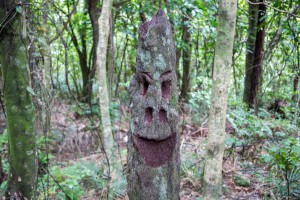 Then you will approach the cliff which is covered by moss: 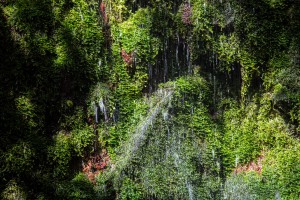 And steady climb up to the base of the cliff where sets of steps lead to the top of the gorge:

Well done I would say and very reliable: 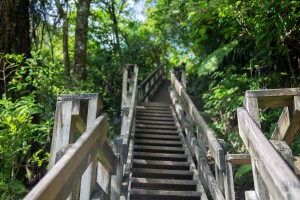 Don’t be afraid by this steps – 45 minutes track from carpark to lookout is family friendly: 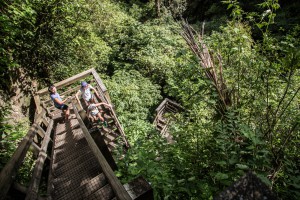 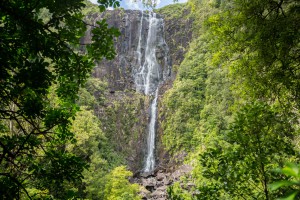 Track from lookout to waterfall summit will take another 45 minutes: 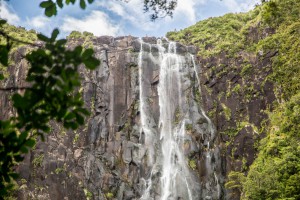 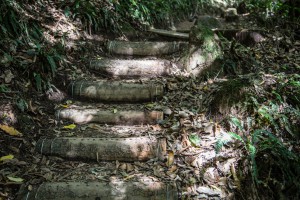 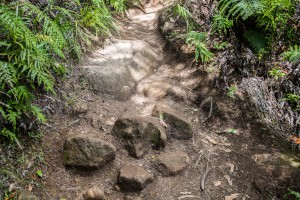 As I have said, it’s a moderate track – we have been watching retired couples climbing up to the summit. At the top of it there is quite flat area: 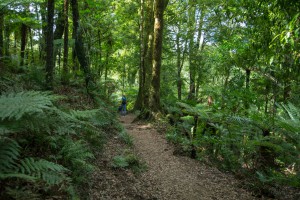 Turn left from the sign and go to the waterfall! 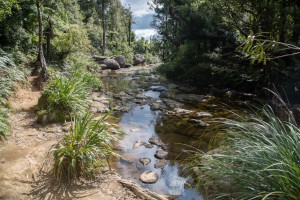 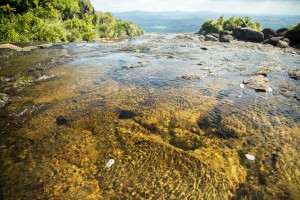 Very beautiful but you can’t swim here! It is better to left kayak at home as well 🙂
You can watch a magnificent view looking back over the valley and the Waikato Plains: 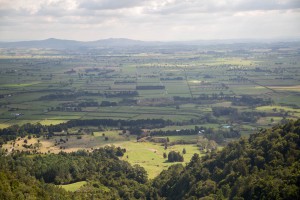 You can cross rocks from the right 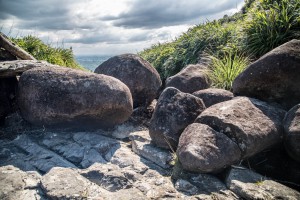 And do some meditation alone 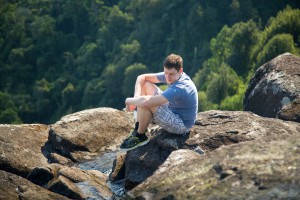 Or, you can go to the left at your own risk: 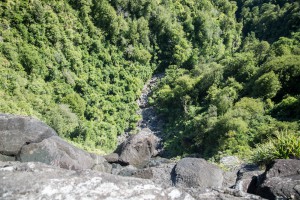 and get closer to water (anyway, I haven’t told you there will be safe on the right as well): 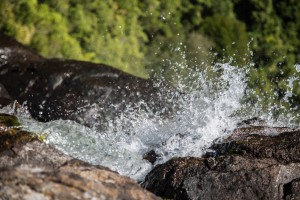 Take a look at these weird rock formations, created by water: 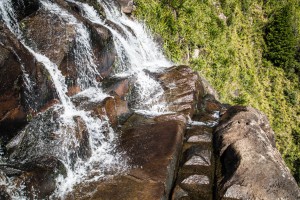 The rest 2 kilometers to camp site we walked on flat track along small creek: 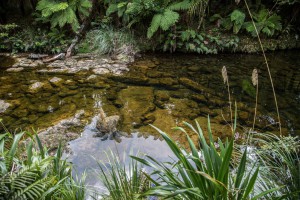 Well, at first we were waiting for Any near the waterfall, making pictures, relaxing and so on, and then we walked, I men we ran, so I couldn’t see backpack of my friends through the trees, branches and leaves, asking them to slow down: guys wait for us, guys, wait… 🙂

Near the first sign we understood we have no idea which way we should go, but we choosed left one. After 5 minutes of walk we met Kesha waiting for us and then we approached another sign. We didn’t know where are the rest hikers, and where is the camp site, so Kesha left his backpack an ran to the right. After 5 minutes he returned back and said there are nobody there.

We turned to the left, crossed the creek via bridge and found meadow with big kauri tree, but there were nobody. -May there should be another one medow. -Ok, let’s go. After 15 minutes of hiking through forest we found out no hikers there and decided to go back to the sign and then turn to the right. I screamed in the forest, just in case but there was no feedback. We spent 20 minutes for coming back, checked meadow again and screamed with no result.

Then we approached the sign and turned to the right. After 20 minutes of walking decided to go back. I had asked Kesha whether any one from the group depends on him because in theory we can return to the carpark and drive back to Auckland together in our car, but he replied that he is a passenger but he has a key from another car and he can not leave. He suggested to stay overnight as is and open a salad 🙂 I asked him what do they do usually in such situations and he replied that main group wait at some place and another guys who are faster are running through forest searching for missing hikers but usually the group waits for the others near the sign to avoid such in principle and he doesn’t know how it could happen. What do you think will they start making dinner or they will waiting for us? 😀 Then we had met another hiker who said he had seen our group, but it seemed to him they got lost as well. OOOk.. Then we went back to the sign and met two our guys running and searching for us. Spend one hour for nothing in forest: Done! 😀 We realised that we can not go down back to the carpark because it’s too late and dark and we had to stay overnight with the rest.

Tired and hungry, we came up to meadow and had a very posh dinner with salads, and main meal and also mulled wine and a fire! The last two were very useful (because we had only one sleeping bag for both of us): 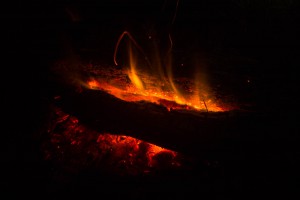 As we figured out, if you both are very slim it is possible to get into one sleeping bag together, but! I managed to zip it up to my chest only, putting one arm into sleeping bag and leaving another one outside because there was not enough space in it. I think approximately after one hour of such “sleeping” my arm became dumb and frozen so I had to turn over until 8AM, not to mention the fact that sleeping on the ground is quite tough. In addition, it was quite chilly that night. Our friends tried to complain next morning about it but as soon as they found out how did we sleep they… Well, you know what I mean! Our sleeping bag survived and it’s not even sold at the seams, but we are not going to do such things anymore.

I think I have missed something.. Oh yeah! We had salmon caviar and awesome night sky with Venus and Mars (and kauri tree in the middle): 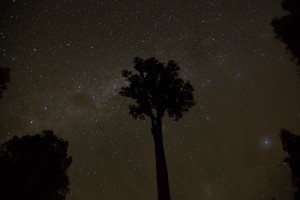 Thanks to everyone, it was really cool!