As you already know, NewZealanders spent several month for choosing a new flag, voted in two referendums and spent almost $27M and then realised that the old flag is not so bad? 🙂 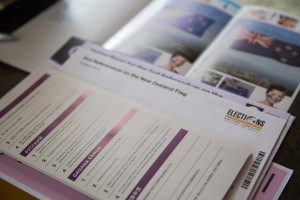 First time prime minister spoked about possible flag change in March 2014. He doesn’t like the old flag because it reminds people about colonial past of New Zealand and also leads to embarrassment because of similarities with Australian flag which has six white stars, simbolizing Southern Cross constellation unlike four red stars on New Zealand flag. Before him, few New Zealand politics tried to replace the flag without success so, there is an opinion that this flag referendum initiative is nothing but a PR company which now is remembered as a shameful story for prime minister and for kiwis itself. It seems every mass media outside New Zealand has mentioned about New Zealand flag replacement failure.

This time, flag referendum campain was made public and transparrent: everyone was allowed to send own flag design – special commitee received over 10,000 of them and spend few month to select best ones, four of them was shown to public in September 2015. All of them looked alike epecially because of incongruous colors. In November 2015 NewZealanders voted in first referendum – everyone recieved an envelope with multi-language instructions, a form and another free-post envelope. A winner, black-blue flag with a silver fern and four stars of Southern Cross was announced one month later.

In March 2016 kiwis voted again in second referendum and choosed between new and old flag. According to preliminary data, almost 57% of NewZealanders voted for the preservation of the old flag. As an option, it make sensce to ask the question about possible flag change durig first referendum, to understand how many people are conservative and keen to keep old “colonial” flag, and how many people are really unhappy about it and want something new. Probably this would allow to understand does it make sense to change a flag in principle and save some money.

It’s nice that newzealanders con into thinking we have a democracy where people can impress their opinions on real issues, but unfortunately such kind of real questions like TPPA (which was signed keeping it’s content a secret), oil drilling, polluted waterways from dirty dairying, house pricing crysis, affordable medicine and addressing poverty are all real questions which kiwis will not get to have a say. At least not this year. :neutral: